Whos who in the world 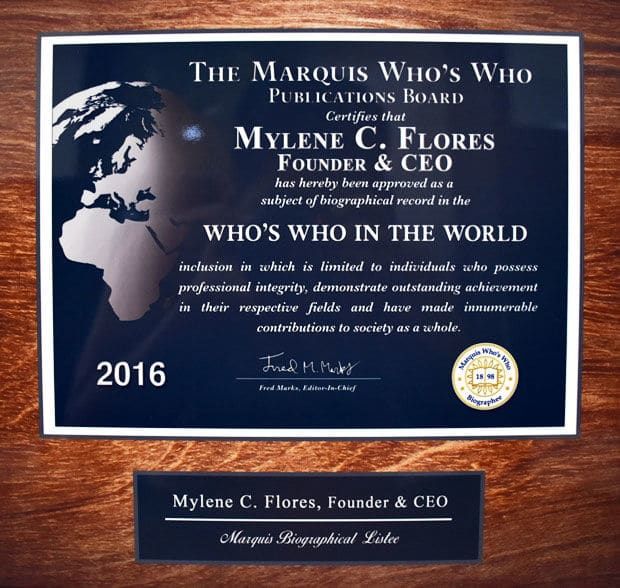 December 22, 2016 when I got a wonderful news via email from Mr. Fred Marks Editor-in-Chief of Marquis Who’s Who that I was nominated and weeks later congratulated me as one of their Biographical listee.
March 17, 2017 I received the Certificate saying, Mylene C. Flores Founder & CEO has hereby approved as a subject of biographical record in the Who’s Who In The World, inclusion in which is limited to individuals who possess professional integrity, demonstrate outstanding achievement in their respective fields and have made innumerable contributions to society as a whole.
About Marquis Who’s Who:
Since 1899, when A.N. Marquis printed the First Edition of Who’s Who in America, Marquis Who’s Who has chronicled the lives of the most accomplished individuals and innovators from every significant field of endeavor, including politics, business, medicine, law, education, art, religion and entertainment. Today, Who’s Who in America remains an essential biographical source for thousands of researchers, journalists, librarians and executive search firms around the world.

Instagram has returned invalid data.
nail extensions nail arts gel nails Job
error: Content is protected !!
We use cookies to ensure that we give you the best experience on our website. If you continue to use this site we will assume that you are happy with it.Ok